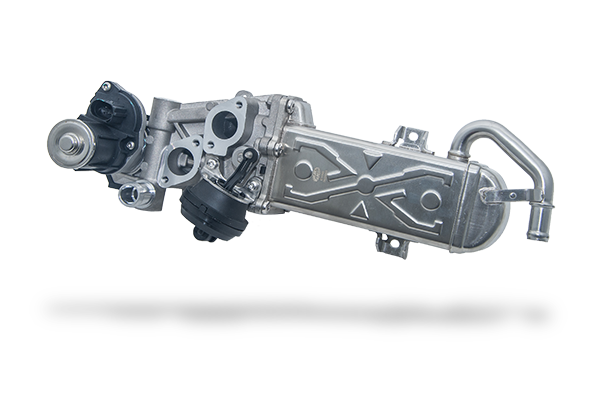 The recirculation of exhaust gases is an essential measure in limiting emissions of nitrogen oxide (NOx), which forms during combustion in the presence of excessive air and at high temperatures. The typical remedy is to recirculate the exhaust gas when the engine is running at partial loads, while at minimum revolution speeds conditions are not always suitable for the application of this strategy.

The exhaust gas introduced into the combustion chamber acts as an inert gas, reducing the percentage of oxygen and limiting the maximum combustion temperature to below 500°C. Burnt gases in fact reduce the peak temperature of the thermo-dynamic cycle in the combustion chamber, thus restricting the formation of nitrogen oxide in exchange for a negligible increase in the quantities of unburnt fuel and of particulates.

Devices dedicated to the recirculation of exhaust gases have evolved in line with the succession of European regulations progressively limiting the emission of nitrogen oxide. The first EGRs were pneumatic, while the latest systems have fully electronic management.

The precise calibration of the opening of the EGR valve requires an electric actuator assisted by a sensor to detect the position reached. The necessity to carry out EGR even when the engine is cold has led to the introduction of a valve to by-pass the heat exchanger which opens the passage for burnt gases once running temperature has been reached.

In compliance with the EURO 6 regulation, systems have emerged that allow exhaust gas recirculation to be extended over a wider area of engine operation. The traditional EGR valve, referred to as the high-pressure EGR valve, which takes the burnt gases from the exhaust manifold and directs them into the intake manifold, has now been joined by a second valve known as the low-pressure EGR valve, which directs a proportion of the gases passing through the DPF upstream of the turbo compressor.

Traditional (high-pressure) EGR valve
The valve is positioned directly downstream of the cylinders, before the turbo compressor turbine. The recovered gases are re-injected directly into the intake, mixing with the fresh incoming air. This reduces nitrogen oxide emissions, but the higher temperatures in the intake have a negative effect on engine performance.

Low-pressure EGR
The exhaust gases are recovered downstream from the anti-particulate filter, cooled further in a heat exchanger and then mixed with fresh air. This gas is compressed by the turbo compressor, cooled in the intercooler and then sent to the combustion chamber. This process limits the quantity of oxygen and the combustion temperature, drastically reducing the formation of NOx.

Malfunctions in the EGR system have direct repercussions on the emissions of pollutants, with the consequential limitation of engine performance, causing the deactivation of the start&stop system and the functions that require torque control, such as adaptive cruise control.
In the past, the clogging of the valve caused by carbon deposits from the use of low-quality diesel combined with mainly urban cycles was one of the most frequent causes of malfunction. The introduction of more evolved management of the EGR valve and a general improvement in fuel quality has significantly reduced these problems.

The applications and the cross references are also available on the TecDoc web platform.